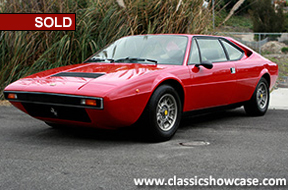 (SOLD) This classic Ferrari has had 2 owners since new, with the second owner being in possession since 2006. The following items were done to the car in 2006: Received major service, brakes, belts, fluids, hoses, clutch cable and valve cover gaskets replaced. Since then, the car has been maintained and serviced on a regular basis. In 2006 the car received new tires installed to new custom Cromodora wheels. This fantastic example features four cam, four Weber carburetors, V-8 engine, 2+2 Seating, and five speed transmission. It has been garage kept, well maintained, and has had service updates performed on a regular basis. It features a Blaupunkt goose neck, Dallas Radio which is period correct and is one of the most expensive Blaupunkt radios of its era. It works to perfection. The body is rust free and a great fit. The car comes complete with the original tool kit and jack. This Dino 208 GT4 is a spectacular original example and a great addition for Ferrari collectors - you will not buy a nicer, better maintained Ferrari than this one!

The Ferrari 208 GT4 was a low-displacement version of the V8 in the Ferrari 308 GT4. Introduced in 1975 the 208 GT4 used a de-bored 2.0 liter V8. The engine is the smallest production V8 in history. Power was 180 hp and the car could reach a top speed of 130 mph. The body was designed by Bertone. The 308/208 series was groundbreaking for Ferrari because it was the first car to feature a mid-engine layout which became the bulk of Ferrari’s engine configurations. After production ended in 1980, only 2,826 of the 308 and 208 GT4’s were produced.