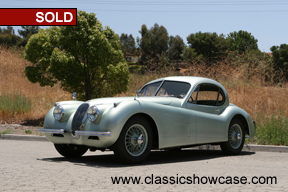 (SOLD) This 1952 Jaguar XK 120 FHC is a very original example of an XK that underwent a no expense spared frame up restoration in 2007. It won “Best of Show” at the Gran Concurso Internacional de Elegancia in Mexico 2007 and it also won “1st place” JCNA in its class 2007. This matching numbers vehicle received a comprehensive bare metal restoration; gorgeous custom fitted woodwork, fine leather upholstery and all systems have been gone through with a strong attention to detail. It has a fabulous color combination of Pastel Green exterior and Green Suede / Biscuit interior. It has original wire wheels painted to match, matching Dunlop RS tires, tool kit and the vehicle has been equipped with a battery cutoff & battery tender for storage. This is a very fast, elegant, and sporty XK definitely one of the finest XK120’s that’s exists today.

The XK 120 Coupe introduced in March, 1951, added a steel roof, roll-up windows and a wood-trimmed interior, air vents, glove compartments, map containers in the door, sun visors, interior lights and foot-well vents. The faired-in front parking lights can be clearly seen. The rakish slant of the window frame adds to the sporting appearance. The engine and drive train were similar throughout the line and no distinct modifications were employed on the FHC. This vehicle had slender chrome bumpers and a 12 slat radiator grill. The XK120 had a profound influence on styling of most sports cars of its time. The engine in the XK was one of the first to use a chain driven double-overhead camshaft. It was a very smooth and free revving motor. It was so far ahead of its time that it was in production until 1986. The XK 120 was a faster 0-60 and had a higher top speed than the American Corvette of its time. The only major shortcomings of the 120 were its drum brakes which tended to fade and over heating issues in traffic. Later model XK’s began to use disc brakes and the vehicle became one of the best braking cars of its time. There were 1357 cars of this model produced in 1952 and a total of 3060 XK120 cars produced in that year.