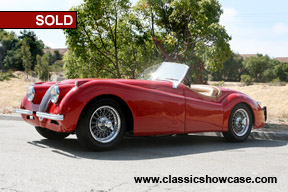 (SOLD) This very desirable XK 120 Roadster has traveled a mere 38,046 miles since new. Factory-equipped with the Special Equipment option which included a high performance 3.4-liter engine with 180 brake horsepower, an upgraded suspension, chrome wire wheels, and a dual exhaust system. As confirmed by the Jaguar Daimler Heritage Trust, the car was manufactured on September 9th, 1953 and imported to the U.S.A. by the legendary Max Hoffman. Soon after the completion of its restoration, this beautifully presented XK 120SE Roadster enjoyed a long and successful show career capturing many prestigious victories. Beginning with an AACA Grand National First Prize Award in 1994, the car continued its winning ways as the 1995 Jaguar Clubs North America National XK 120 Champion, earning a score of 99.9 points. Between 2003 and 2005 the Jaguar also won events at Bay Harbor, Hilton Head, and the Glenmoor Gathering. This car will also be familiar to regular attendees of the Meadow Brook Concours d’Elegance where it won Best in Class in 1994.This spectacular pedigree example has recently been serviced and detailed inside and out by Classic Showcase.

During the Second World War, William Lyons and his staff designed what would be the world’s first high-volume twin cam engine. After the war, a short wheelbase chassis and a two-seat sports roadster body were married to this new engine and when the XK 120 was introduced at the 1948 Earl’s Court Motor Show. The XK 120’s body was a fresh, minimalist design with gracefully flowing curves running front to back, while the modern chassis design provided excellent handling.